Curious, he just wanted to explore areas, be street wise. That’s how his struggle with drugs and alcohol began.

Carroll remembers exactly when his struggle with substance abuse began. “When I look back on things now, I see where pieces of my life had got out of hand. Life took a real bad downfall for me at 19.”

He was an outgoing guy, curious about a lot of things. He liked hanging out with friends and having fun. But he also wanted to, as Carroll describes it, explore “areas, street wise.” He started experimenting with alcohol and marijuana. It wasn’t long before he moved on to cocaine, then heroin. “By the time I was 25, I had been put on probation for a crime that I committed [because] of my using drugs,” he recalled. “I think I spent about practically all my 30s, 40s, 50s usually having a substance habit.” 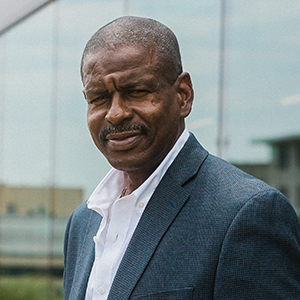 With medication for opioid use disorder, “my heroin days are hopefully behind me.”

Carroll struggled in and out of programs and trying to stop on his own. Often, a visit to the detox center only ended up being for “an oil change… going in, getting me some rest, a few meals under my belt and then come back out.” And in a few weeks, he was using again. “I had a stint of [being] substance abuse-free for about 10 years,” he remembers, “but I relapsed.” Then, one day, he made a decision. “I got real emotional. It was at night, and I asked one of my friends to take me to detox.”

That’s when his road back to recovery began.

He owes much of his newfound confidence that he’ll stay clean to a medication for opioid use disorder, or MOUD, that reduces his cravings for heroin and increases his chances for long-term recovery. “Vivitrol is really working for me,” says Carroll. “I haven’t had any cravings. I haven’t used [for months]. I get the shot every 30 days, and it’s been working.” He says he’s feeling like his old self – when was clean for those 10 years. “It’s been productive, living life on life’s terms, being able to get up in the morning and don’t feel sick that I got to have heroin.”

A lifelong resident of the District, Carroll has been able to save some money, thanks to the support of people around him who recognize that he’s going through a rough time. He hopes to become a motivational speaker and advocate for substance abuse prevention and treatment.

“I’m a survivor,” he says. “I just want to say if someone is out there struggling like me, my suggestion is it starts with them getting in treatment.”

Get in touch with a Certified DC Peer

A loved one is suffering from addiction

I’d like a peer to speak to my organization